“When you buy wine, don’t buy one bottle, buy six or twelve.” – Sound advice from Christophe Brunet, especially when it comes to these wines; if only your budget can stretch that far…

Following a tour through Champagne, Burgundy, Tuscany and the Rhône, discussed in Part 1 of this post, Christophe Brunet, wine ambassador for the Primum Familiae Vini brought us to Spain for two wines. You might think, looking at the vintages, that these wines are more ready for drinking, however they are still incredibly youthful and would benefit from greater bottle age. First was the Gran Coronas Mas La Plana, vintage 2001, from the Torres family. This wine is 100% cabernet sauvignon, harvested from vines that were planted in 1964 on a 20-hectare, single estate vineyard in Catalonia. The wine spends 12 months in French oak. Deep ruby in colour, cloudy and with a bricking rim. The nose was very truffly to begin with – a sign of the ten years age thus far. Eventually classic cabernet notes of green bell pepper, and dark, blackfruits emerge, although they are accompanied by classic aromas of the region – warm earth, rosemary and rustic coffee beans. High in alcohol, though as with all these wines, matched by a sufficient, if moderate, acidity. There are soft, creamy, ripe tannins, blackcurrant and black olives on the palate and a very ripe-fruit finish. This wine was perhaps less concentrated than some of the other reds in the flight, although makes up for this in complexity. A generous but serious wine.

Moving north and west of Madrid to the Ribera del Duero region, we encounter Vega Sicilia, producer of perhaps Spain’s most famous wine – the Vega Sicilia Ùnico. We were privileged to taste the 2000 vintage – a very good vintage for the region, and amazingly, a wine that has only just been released! The wine is a blend dominated by tempranillo (90%) and rounded out with cabernet sauvignon, it then spends at least seven years in a mixture of American and French oak barrels; after another couple of years stored in bottle, the wine is finally released to the market. So, yes, an astonishing wine by a producer of incredible pedigree, and although the sun that ripened the grapes that produced this wine shone eleven years ago, this wine is more than capable of evolving further in the bottle for decades to come. In the glass it was a deep ruby, cloudy, with a thin brick rim. The wine had a very concentrated, complex nose: roasted rosemary, cigar leaf; it was very herbaceous, but overlaid with sweet vanilla, subtle coconut, coffee, bitter chocolate, molasses, ripe dark fruit and citrus peel. With the warm Spanish climate you may expect a real blockbuster of a wine, but while this wine is high in alcohol, with moderate acidity, the body is only medium in weight with grippy, silky-textured tannins. The oak is very well integrated and the wine has a lovely complex, dark-fruit, leafy finish. As I said, this wine feels youthful, with a tight, concentrated structure.

We then returned to France for what was, for many, the highlight of the night: Château Mouton-Rothschild, Bordeaux first growth of the Pauillac appellation, vintage 1998. This is classic Left-Bank claret at the top of its game. 86% cabernet sauvignon, 12% merlot and 2% cabernet franc; aged in new French barriques for up to 22 months. Deep ruby in the glass, somewhat cloudy with a bright red rim. The nose began with dark, just-ripe blackcurrant aromas – neither green and underripe nor overly blowsy and fruity. 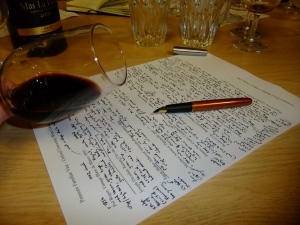 Vanilla from the oak was in the background of the aroma profile, accompanied by the classic cabernet bell pepper note – although edging to yellow peppers rather than green for me. Celery, cut grass, truffle, mushroom, naphthalene and a certain meatiness rounded out the aromas. The palate contained crisp acidity, moderate alcohol, some flintiness and a certain appealing austerity in the flavours. The tannins were ripe, grippy and elegant – classic cabernet claret tannins. A wine that had all the elements in just the right amount.

After a barrelling of reds, the whites made a comeback in the form of sweeter examples. Egon Müller provided a late harvest riesling – the Scharzhofberger Spätlese 2009, while Hugel et Fils produced a 2005 Vendange Tardive Gewurztraminer. The riesling comes from a tiny, 7-hectare estate on the banks of the river Saar. Pale straw in appearance with a very aromatic nose – lilies, lime leaf, pineapple and a classic German-riesling minerality. This minerality was even more intense on the palate, with a real ‘flintyness’, a razor-sharp acidity, a light body, low alcohol (8%), some notable astringency, but a lovely, soothing sweetness. A truly incredible and complex wine, though it is several decades too young!

The 2005 Vendange Tardive Gewurztraminer had a similar level of sweetness (about 50g residual sugar compared to 40g in the riesling); vendange tardive is French for ‘late harvest’.  That similarity aside, the two wines were worlds apart. 2005 has produced less overt gewurztraminers in Alsace than other years, but even so, the nature of the grape provides concentrated aromas of lychees and pear and a low-acid, luscious, medium-sweet body. The typical ‘rosewater’ note of gewurz is notably more elegant and restrained than in some examples. Despite the low acidity (a hallmark of gewurz), the alcohol is well balanced and there is a refreshing minerality to the finish – it is elegant, flinty and fresh, with ginger spice and orange peel. Delicious and complex.

The final wine of the night served as an appropriate digestif: Graham’s Vintage Port, 1980, from the Symington Family Estates. I’m not as familiar with ports as I am with other, non-fortified wines, however, this example was very striking. A deep ruby in colour, cloudy with an orange-brick rim. The nose was fragrant, fresh and floral; there were distinct notes of blood orange, plum and blueberry too. The palate was intense, with a crisp acidity, molasses and nuts making the flavours along with incredibly youthful fruit. What really struck me about this wine, aside from the way in which the complex flavours and the various structural elements were all held in remarkable balance, was this ‘youthful’ quality. It had all the complexities of a wine of its age, yet still felt as if it were just out of the starting blocks and had a very long way to run. Had I tasted this blind, I don’t think I would have put it as a full three decades old!

Thus an enjoyable evening was had by all. The audience was cheekily asked for their favourite wines of the night. How to choose a first amongst a flight of equals? Certainly some wines were drinking readily, whereas others needed more time in bottle. And the latter wines were certainly more present in the minds of the crowd than the delicious champagne, for instance. When it came to it, however, there was a roughly equal split between the Vega Sicilia and the Mouton-Rothschild, with a few outliers for the others. I fell into the Vega Sicilia camp, though can hardly wait another decade or two for the Gewurz or the Tignanello!